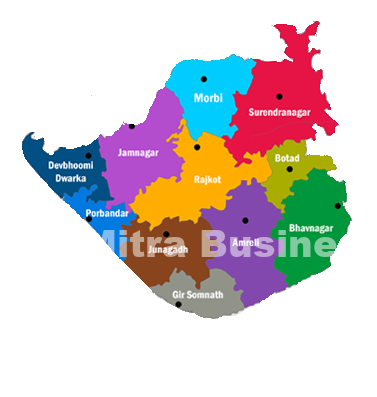 We the Mitra business solution provider are working in Saurashtra region. In which there’re Saurashtra’s 11 Districts. Which are as under.

Saurashtra’s 11 District Basic Info as under :

This is the district which is located at the sea shore and it’s believed that this city was established by Lord Shree Krishna. And at that time it was the capital of the empire of Lord Krishna. More over there is another belief also according to which it was the city made by gold. And now a days this  golden city had sunk in the sea water.

There’s a huge temple of Lord Krishna in Dwarika.   And every year thousands of pilgrims come to visit this temple. The business of this city is based on this pilgrimage only. So we can’t see more development else related to temple in this city.

This is the port situated at sea shore in Saurashtra.  The major businesses are related to import export, metallurgical, food, agro related businesses are developed  in this city. Major  productions are going to be exported. More over due to it’s a port, the profession to prepare papers of export import also is popular.

Morbi is such  a city where main business is manufecturing of clocks, watches and ceramic tiles. Now a days there’re so many tiles factories in Morbi. And people are well to do in this field.

Actually Rajkot is the main centre of manufacturing of diesel engine and selling of automobile sector. More over now a days it became educational hub of Saurashtra. Because now a days there’re so many  schools and colleges are already developed in Rajkot. And people come to Rajkot from different villages for jobs and they settle in Rajkot by getting job or establishing their own businesses. Thus majority public which live in Rajkot, is mainly from Rural areas or small cities.

We provide franchise business, properties, financial services in Rajkot district  to different entrepreneurs according to their requirements.

Surendranagar is located in between Rajkot and Ahmedabad. We remember this because every time when we go to Ahmedabad by travels, it always holts at Surendranagar. And after Surendranagar, the region of Gujarat starts. You can feel this immediately by living style and language of the people. Actually it’s not a big city but it’s a district of Saurashtra. In which people are mainly angaged in the economical activity of hotel business and others.

We provide franchise business and properties and financial services in Surendranagar district.

Bhavnagar is one of the important city of Saurashtra. Which is located at South eastern tip at the shore of gulf of Khambhat. And it’s a well developed port. That’s why it’s important.

Mahuva also its one of the famous port where business of wooden materials and export business is already well developed for last so many years. And it’s an educational hub also. For last many years.

Girsomnath is such a district in which tourism is welldeveloped due to its location at seashore and Somnath temple. This temple has historic importance that , Mahmood Ghori had attacked on it sevaral times to rob its gold but could not succeed due to Rajputs at that time. This temple is the temple of lord Shiva. Which is situated at sea shore. So its a world famous location for tourism. And here, hotel business is well developed.

Junagadh is located in Saurashtra near by Girnar mountain.  And its main business is hotel business which is completely based on tourism due to  mountain region.  There’s a forest region also in Junagadh. In which lions can be seen freely. And people come to see lions from abroad also.

This is the city which is situated at sea shore and a very famous port for last so many years. More over it’s an educational hub also. The first medical college in Gujarat  was established in Jamnagar at the time of Jamsaheb as a ruler at that time.  So people are engaged in the export import business in this district.

Amareli district is located in the middle of Saurashtra region. It’s a small district and got the designation of district before some time only.

Botad is the district which is located nearby Rajkot, Surendranagar, and Amareli districts. Swami na Gadhda is located in this district. So mainly people’s economical activities are based on this Swaminarayan temple in this region.  Especially in Gadhda.

As we know, government always interferes in transactions of real estates. Especially in commercial real estates. So let’s discuss about it. So that we can know, how does it effect us.

For this purpose, government has newly introduced an act for real estates named “RERA”.

According to which, all the transactions of real estates will be quiet transparent and cheating with investors will not be done. Such as now a days following cases occur.

Owner doesn’t know and his land is going to sold more than one time.

Actually this act came into existence due to such cases only. In such cases, after purchasing land some years later, any one claims on the same land that he’s the owner. And the purchaser has already purchased the same land by paying market price. Then after also he has to face such situation.

More over in some of the cases, land is going to be possessed by third party. And when owner goes to his land, it’s not vacant. It’s possessed by someone else. And such people demand money to vacant the land. In such situation, in general situations, owners become ready to pay the demanded amount. So now a days this became a business for such people. So for safety and transparency in such transactions this act is applied.

According to RERA transactions of commercial and residential real estate

The projects where the land is more than 500 sq. M. Or eight apartments to register with RERA lunching a project in order to provide greater transparency.

Thus there’re the different laws applied periodically by government to protect the rights of property owners. Out of which present law is RERA.

Properties for Wholesale and Retails in Rajkot